I am a plant systematist, plant community ecologist, biogeographer, and conservation biologist focused on the species and systems of the Southeastern United States.  Students in my lab focus on the systematics and biogeography of the Southeastern United States, community classification developing the U.S. National Vegetation Classification, and land management, conservation planning, and environmental policy questions involving the conservation of Southeastern United States ecosystems and species. Prior to coming to UNC in 2002, I had an extensive career in applied conservation biology, working with the North Carolina Natural Heritage Program, The Nature Conservancy, and NatureServe (the Association for Biodiversity Information).  My conservation interests and activities continue, with my service as Trustee of the N.C. Natural Heritage Trust Fund (http://www.ncnhtf.org/) from 2008-2013 (which has provided $328 million through 518 grants to support the conservation of more than 298,000 acres of natural areas in North Carolina), Chair of the N.C. Plant Conservation Program’s Scientific Advisory Committee (http://www.ncagr.gov/plantindustry/plant/plantconserve/index.htm), and Chair of the N.C. Natural Heritage Program Advisory Committee (http://www.ncnhp.org/). I am the author of Flora of the Southern & Mid-Atlantic States (http://www.herbarium.unc.edu/flora.htm), a taxonomic manual covering about 7000 vascular plant taxa, now the standard in use across much of the Southeastern United States.  With J. Chris Ludwig and Johnny Townsend, I am co-author of the Flora of Virginia (http://www.floraofvirginia.org/), published in 2012 and awarded the Thomas Jefferson Award for Conservation, and am also an active author, editor, reviewer, and director of the Flora of North America project (http://fna.huh.harvard.edu/).  I was a co-founder of the Carolina Vegetation Survey (http://cvs.bio.unc.edu/), and continue as one of its four organizers.

In the Hurlbert Lab we ask questions about the structure of ecological communities, and the processes that are responsible for determining the patterns of diversity, composition, turnover and relative abundance both within local assemblages and across the globe. Our work spans vertebrate, invertebrate, and plant communities, and we use a variety of approaches from manipulative experiments to modeling to working with global scale datasets. Current projects in the lab use

“Ecological patterns, about which we construct theories, are only interesting if they are repeated. They may be repeated in space or in time, and they may be repeated from species to species. A pattern which has all of these kinds of repetition is of special interest because of its generality, and yet these very general events are only seen by ecologists with rather blurred vision. The very sharp-sighted always find discrepancies and are able to say that there is no generality, only a spectrum of special cases. This diversity of outlook has proved useful in every science, but it is nowhere more marked than in ecology.”

How do animals produce and control movement? How does a network of muscles, rigid elements and neurons – components of varying quality and with temporally varying responses – generate robust outputs in the face of uncertain circumstances? For example, the flight of the sphingid moth Manduca sexta is enabled by a complex, hierarchical biological system that involves processes and components at several different levels: the nervous system of the moth activates a suite of 20 flight muscles which actuate mechanical structures (the wings) that do work on the surrounding fluid (air), generating forces to support and propel the moth. These forces lead to changes in position and orientation which are detected by the sensory system and then used, along with underlying feedforward patterns as the basis for future muscle activation patterns, continuing the process and keeping the moth in the air.

I apply both experimental and computational modeling approaches to these questions, iterating between the two approaches. For example, the figure below shows the wingbeat to wingbeat variation in wing motion during stable hovering flight for both a real moth and a computational model of the moth. In both the model and organism, steady flight behaviour requires continuous slight adjustments. In addition to investigating the underlying variation of steady locomotion, I also make direct measurements from animals engaged in maneuvering or other unsteady movements. Figure 2 (below) outlines the basis of roll damping in the flapping flight of birds. Surprisingly high roll damping coefficients allow birds to control roll orientation with simple changes in wingbeat amplitude and passively dissipate roll velocity once symmetric flapping resumes. The overarching goal of my research is to understand how behavior drives the origins and distribution of biodiversity. Because mate choice is a potent selective force that can be critical in the formation of novel phenotypes and new species, I focus on the evolution of mating behavior and its role in ecological and evolutionary processes. I work with natural populations and use a variety of approaches ranging from behavioral experiments to genetic analyses. For more details, including references, please go to my lab website.

I’m broadly interested in the interplay among evolution, ecology, and development.  My current research focuses on three main topics.

First, I study the causes and consequences of a common feature of development: its tendency to be responsive to changes in the environment.  Although biologists have long known that an individual organism’s appearance, behavior, and physiology can be modified by its environmental conditions, the implications of such developmental (or phenotypic) plasticity for ecology and evolution remain poorly understood. Moreover, the underlying genetic and developmental mechanisms that foster plasticity’s evolution are unclear.  I seek to understand the impacts of plasticity on diversification and evolutionary innovation, as well as how and why plasticity arises in the first place.

Second, I study the role of competition in generating and maintaining biodiversity.  I’m particularly interested in unravelling whether and how competition promotes trait evolution and the impacts of any such evolution on the formation of new traits and new species.

Finally, I study a striking form of convergent evolution known as Batesian mimicry, which evolves when a palatable species co-opts a warning signal from a dangerous species and thereby deceives its potential predators. Such instances of “life imitating life” provide an ideal opportunity to assess natural selection’s efficacy in promoting adaptation.

For more details on my lab and research, please visit my lab page by clicking on the link above.

William M. Kier is interested in the comparative biomechanics of marine invertebrates. He is especially interested in the functional morphology of musculoskeletal systems, in the structure, function, development and evolution of muscle, and in invertebrate zoology, with particular emphasis on the biology of cephalopod molluscs (octopus and squid). His research is conducted at a variety of levels and integrates the range from the behavior of the entire animal to the ultrastructure and biochemistry of its tissue

s. A variety of techniques are used including normal and high-speed video, histological and histochemical methods, light and transmission electron microscopy, electromyography, muscle mechanics, biochemistry and molecular techniques. His research concerns the role of the musculature of cephalopods (squid, octopus, nautilus) in both creating movement and providing skeletal support. The principles derived from this analysis have been applied to other structures such as the tongues of mammals and lizards and the trunk of the elephant. More recently, these insights have been used in collaboration with engineers and biologists in the design and construction of novel robotic mechanisms. He is also investigating the mechanisms of the evolution of muscle specialization, especially the evolution of fast contraction in the muscle of cephalopods. Please visit the Kier Lab home page for more information on these topics.

How do organisms respond and adapt to complex, variable, natural environments? Our research integrates environmental physiology, ecology and evolution to address this question, using a combination of laboratory, field and modeling approaches. Most of our research is with temperate insects and their interactions with plants and parasites, with an emphasis on butterflies and moths; we use Manduca sexta (Tobacco Hornworms) as a model system in many of our studies. One major theme in recent years is plastic and evolutionary responses to human-induced environmental changes—climate change, invasive species, agroecosystems—and their ecological consequences.

My research focuses on the evolutionary genetics and genomics of aspects of speciation and adaptation. The basic concepts I study are how one species can split into two over time and what factors influence how organisms adapt to their environment. Current work centers on exploring questions in these areas using copepods and moths as model systems. Here are some interests:

My research addresses the nature of genetic variation that underlies speciation and adaptation. Specifically, I attempt to unravel how genetic changes at the molecular level can lead to phenotypic changes of evolutionary significance. A major thrust of my research program has been to understand how genetic variation within populations translates into variation between populations and species, and to determine the impact of natural selection on this process. In my current work I am targeting specific genetic systems and using genome-wide approaches to determine the regions of the genome that could be involved in generating reproductive isolation that occurs after mating (postzygotic reproductive isolation). I am also examining the physiological and fitness consequences of genetic variation using both targeted gene and genome-wide approaches. Specifically we are looking at the evolution of temperature and salinity adaptation across populations. My work to date has largely focused on two primary systems systems-copepods and moths. 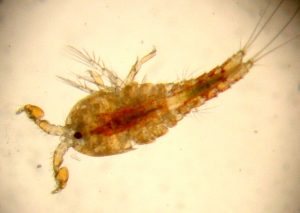 atic genetic differentiation even between relatively proximate localities. Crosses between these populations typically show hybrid breakdown (decreases in fitness of F2 individuals). Understanding the genetic basis of this hybrid breakdown could yield insights into the early stages of the process of speciation (link). Recent work in the lab has also focused on the nature of adaptation in thermal tolerance among populations of this species and its implications for reproductive isolation in this system. This work could help reveal how species will be able to handle future changes in temperature environments (link).

My lab is now working in collaboration with Joel Kingsolver’s lab in a project studying thermal biology and genetics in caterpillars of Manduca sexta, the tobacco hornworm. This project focuses on how organisms respond to variation in temperature over time (i.e. warmer during the day and cooler at ni

ght) and will help us understand better how to predict how organisms will be able to handle a changing climate. We will be focusing in my lab in how the caterpillars are responding on the genetic and protein levels and how this can help us understand what is happening at the level of the whole organism. Another interesting part of the work is comparing field and lab-adapted animals to which can illuminate how thermal tolerance can change over relatively short periods of time (link).

I am interested in a broad range of topics from evolutionary genetics to behavioral ecology. I explore these topics through the techniques of theoretical biology. My main goal is to use mathematical models to integrate rigorous evolutionary theory with hypotheses explaining behavioral and ecological patterns and phenomena. I am excited to provide integrated approaches to these questions by combining mathematical with experimental, genetic, and comparative techniques through collaborations with students and colleagues.

A large portion of my current work explores mechanisms that drive speciation through the evolution of premating isolation. One of the primary adaptive hypotheses for this evolution is that it occurs through the process of reinforcement, where it is driven by selection against the production of unfit hybrids. I have been exploring reinforcement by trying to pinpoint the forces of selection and genetic associations that cause evolution of alleles for female preferences for conspecific males. A current focus in this area is how speciation processes are affected when mating preferences and/or mating cues are influenced by learning.

An additional area of interest is mate choice, with a particular focus on male mate choice. I have used several different approaches to explore the question of whether male mate choice would be expected to evolve during polygyny. Other projects on mate choice include the effects and evolution of learning on sexual selection.